I left home at 6:00am. When we got to the VT border I was greeted with Why? Why? Why? by border patrol. Every answer I gave resulted with a why? I don’t think the young gentleman knew what a blogger was and he only stopped asking questions when I mentioned the World’s Longest Yard Sale. He responded with ”Good-luck with that!”. I would have thought bringing up GMC and Habitat for Humanity would be enough… but nope.

Sébastien and my daughters dropped me off at the Burlington airport and off I went. Nobody cried even though we all knew that we have never been apart. I got to the airport at 7:15am and at 7:25am I was sitting at my gate with a coffee. I can’t believe how fast I got through check-in and security, a lot faster than the Montreal Airport. WiFi wasn’t working at the airport though.

While I sat at the gate, I noticed that there were only two couples, the rest were travelling alone. The last time I traveled alone I was 12 or 13 (I flew back from my aunt who was living in Cincinnati). I have flown several times since, but always with family members. It’s a lot less stressful now that I’m older.

The flight went very well and I met a wonderful man on the flight. He was flying to one of his welding schools (I should have asked if he would give me a class on welding). Welding 101 with The DIY Dreamer would be pretty cool right? I did giggle a few times while flipping through the Sky Mall magazine.

When I arrived at the Detroit airport, I had to walk for what seemed like forever to get to baggage claim. There was an awesome dome like hallway that was lit up with lights that made me think of the northern lights. It was really neat walking through that. When I finally got to baggage claim, it was time to meet up with the 2013 GMC Hidden Treasure Adventure crew. And what an awesome crew it was.

We hit it off immediately and enjoyed a wonderful meal together while getting all the necessary info about our adventure. We also picked out of a hat what room we would be furnishing and decorating. I actually picked one paper that had two rooms: Music/Office Room and the Kids Bathroom. Once lunch was done, it was time to check out our rides! 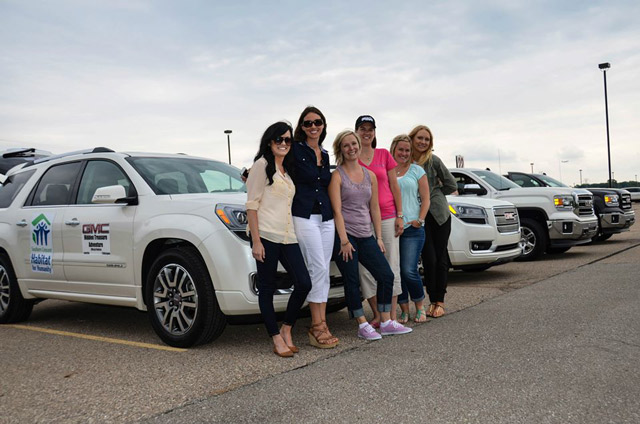 We went to a quiet parking lot where we got an info session about all the features the 2013 Acadia Denali was equipped with. Including the GMC IntelliLink, OnStar, Head-Up Display, Side Blind Zone Alert and Rear Cross Traffic Alert, Bluetooth for phone, USB charging ports, air conditioned seats and so much more. We also received a cooler bag filled with things we might need a long the way aka an emergency bag.

Jocie and I were paired together and off we went to our very first stop – Habitat for Humanity Huron Valley ReStore in Michigan. Everyone found something at the ReStore. I found a really cute distressed black wooden chair and some vinyl records.

After we were done shopping we headed for supper. We had a great meal and got to know each other a lot better. During the meal I started to feel ill. :( Do you know how embarrassing it is to meet people for the first time and then you start to feel like crap? I had to excuse myself and I went and rested in our Acadia Denali in the parking lot. However, everyone was so kind and was often checking up on me (which I truly appreciated).

The day ended by checking in to the hotel in Jackson, Michigan. However, I had to get this shot before bed! :)

Disclosure: I am not being compensated for this post. I just wanted to share the adventure with you.

I just came from Courtney's site Christine - how PROUD I am of you - and it looks like you did a beautiful job!!!!! Can't wait to see photos of what you accomplished! Big hugs, suzan

I've really enjoyed seeing your photos.thank you so much :) ;)

Great recap! Thanks so much for taking these photos. I'm enjoying living vicariously through you. Do you mind if I use your photo of the group?

What a cool adventure you're on! Canadian Girls Rock!! xo

This site uses Akismet to reduce spam. Learn how your comment data is processed. 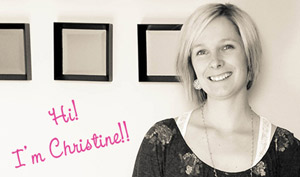